Wanna explore the unexplored but can’t decide where to go? Well, you are the right place then. Here is a travel guide for beautiful Orchha, MP. Read on to know more…

Orchha, the once princely state of Bundelkhand region now lies hidden in the heart of India. Orchha, means ‘Hidden Place’ and true to its name is not easy to locate even on the map. This town lies on the Betwa River in Madhya Pradesh, approx 15 km from Jhansi in Uttar Pradesh and also lies close to another popular tourist destination, Khajuraho, MP.

Orchha is a small, serene town that one can actually see on foot in just two days. At every other kilometre, there is a story waiting to be heard, a place to be explored and legends to be mesmerized with. The town seems to have frozen in its time, as the architecture of the buildings still retains their original opulence.

It’s quite a task to reach there, you can follow this guide by HolidayIQ to make your travel easy and comfortable.

Now that you have reached, here is an answer to What to do? Where to go?

Raja Ram Mandir is the only temple around the area where Lord Rama is worshipped as a King in all his glory. The beautiful temple has an interesting story attached to its significance.

The legend states that the famous Chaturbhuj temple was to be built for Lord Rama but unfortunately when the idols arrived from Ayodhaya the Chaturbhuj temple was in its final touches. The queen placed the idol in her kitchen and took great care like her own child. But, when the Chaturbhuj Temple was built, the idols didn’t move and so another temple was built for Rama which is now called Raja Ram Mandir. The Temple resembles the palace as Rama is worshipped as a King in Orchha.

Light and Sound show at Fort

A dramatic Light and Sound Show runs everyday in the Fort premise which is a not to miss when you are in Orchha. The show narrates the history of the town and its connection with Jhansi. The lights glow up the Raj Mahal and Jahangir Mahal, the audiovisual experience describes the glory of Orchha’s history loud and clear. The past comes alive and walls reverberate the sound of battles fought. Well, the goosebumps are inevitable.

Walk on the Riverside

There are 14 Chattris(Cenotaphs) in Orchha, built as the memorials to the kings and royalties. The chattris are sophistically located around the river which makes it a sight to behold at sunset. Also, the sunrise at the Betwa is not to be missed, the serenity and the earthy fragrance of the place are sure to capture your heart.

After Raja Ram Mandir was built for Lord Rama, Chaturbhuj temple was then devoted to Laxmi Narayan. The rich murals of the temple have withstood the test of time and temple sight is a treat to eyes. There are colourful paintings on the temple premises which tell different tales of ancient India. There is a market just outside the temple and from temple’s top one can enjoy a 360-degree view of Orchha.

One of the most significant sites of Orchha that has many unheard tales still hidden in its walls. The Fort Complex consists of palaces locally called mahals: Rai Praveen Mahal, Raj Mahal and Jahangir Mahal. The greatness of the Jahangir Mahal is sure to leave you awestruck. The Mahal that was built in the honour of the great emperor in the 17th Century looks mesmerizing in the evening, just before the sunset. The fading rays create the silhouettes of the windows and domes and give out a magical sight. The Raj Mahal is a place where you enjoy the beauty and tranquillity dancing in vivid colours. The Mahals have hidden staircases, rooms and exits that depict the architectural intelligence of that era.

Orchha, the hidden gem of MP has a lot of stories in its belly. The town has a glorious past, vast religious beliefs and war stories reeking out of it. This quaint town is magical and real at the same time. Don’t wait up, go travel back in time.

Let me know in the comments if you have been to this amazing place or contact me for any other suggestions or comments. Also here is a picture of me with my group at the fort palace!

incredible indiaindiamadhya pradeshmporchhatempletourismtravel
Prev post From the Diary of an Impulsive Overthinker
Next post Curd Rice: Recipe and Facts 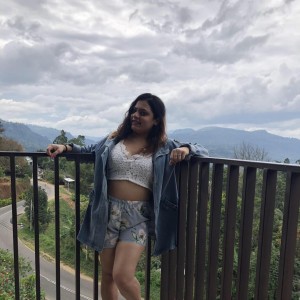 Shreya Sawhney, the creator of Fickle Girl is a real-life fickle-minded person. She is an aspiring marketer who is curious to learn everything and anything. Well, this curiosity makes her indecisive and confused which is how adventures happen in her life.